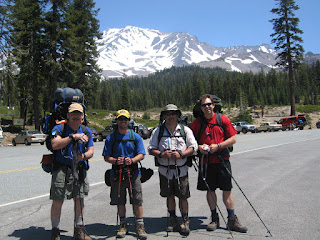 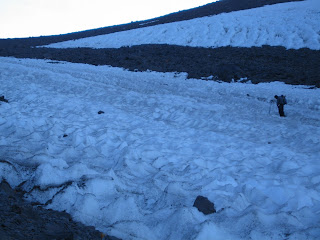 Shasta proved to be too much for myself, Rob, and John. Art was the only one who persevered and made it all the way. After being overcome with disequilibrium at the side of “the heart”, I took a break in the rocks and proceeded to get worse and commenced with vomiting. Me and Art had been going together up that time, he kept on of course. After five minutes of wiping frozen vomit from my mouth and nose I quit.
John had stopped an hour earlier and slept in the fetal position for about 30-45 minutes. He then woke up refreshed and made it past the Red Banks and within about 45 minutes of the summit.
I passed Rob on my way down. He kept on for a bit and quit about the same place I did.
Honestly, this was the hardest fu**ing thing I ever done. Mt. Whitney may be longer and higher, but this was more intense.
When I got back to camp I said that I would never try Mt. Shasta again, but now I think I might. Personally, I was not as aerobically fit as I needed to be. I would also get some new and different gear. I would take a different more direct rout up. We should have planned our route more carefully; we wasted precious energy early in the rocks.
May 2008 is on my mind…